Trump vs. Sanders: Measuring How Divided We Are

Home / Bottom Line / Trump vs. Sanders: Measuring How Divided We Are 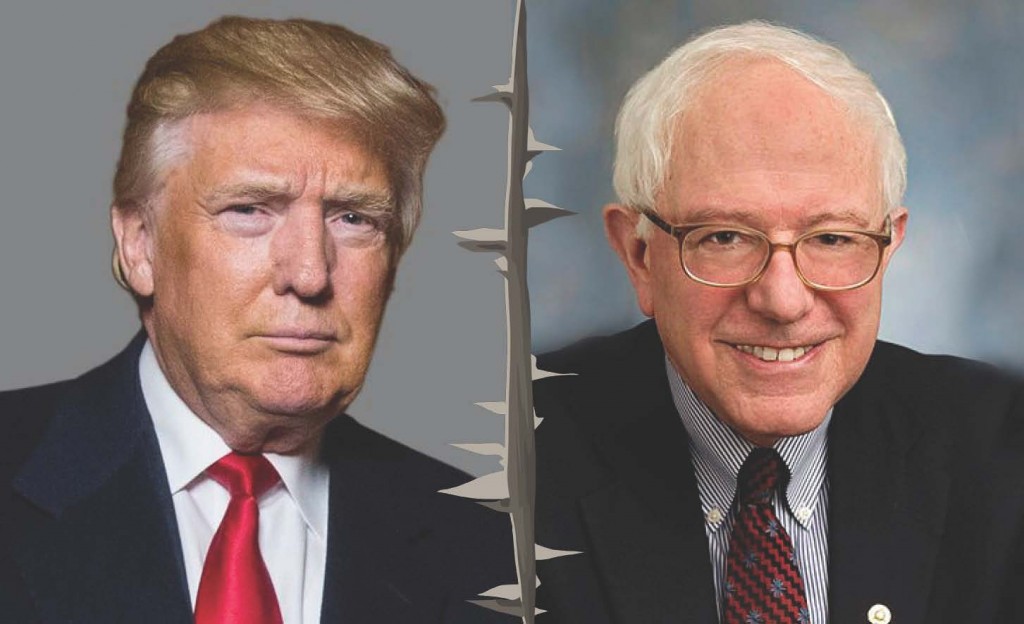 The very fact that our upcoming presidential election could pit Bernie Sanders against Donald Trump has given us a much-needed measuring stick to attempt to calculate how truly divided this nation really is. My answer is, “beyond imagination.” That such a gap is now beginning to more fully manifest tells us a number of mind-numbing but tragic things. Let’s try and trace some of the issues that got us here.

Here is my top-ten list of the most likely candidates and culprits that helped get us here:

The list could go on. I am sure I am omitting issues all of us could add to my list. So here we are with a well-intentioned socialist who clearly knows nothing about economic history, the sustainability of employment, etc., talking to millions of youth who are the victims of the ten issues I just raised, ignorantly crying out to the socially designed ignorant. On the other hand, we have “The Donald,” populist egotist, mobilizing the angry victims of the “top ten” culprits we just slogged through, mad as hell and betting on the come that Donald can actually pull off “making America great again.” Well, Donald, unless you—or anyone else for that matter—is willing to truly engage how we got here and how to begin to reverse it, you don’t have a snowball’s chance in you know where.

By God’s grace and some really serious talking by the right people, we could begin a new start in this twenty-first century “flat world.” But until populist reactions and ignorant sound bites subside on both sides of this great divide, it ain’t going to happen. And that is… THE BOTTOM LINE.

Principle Eleven: Results-Based Reality In many ways, results-based reality is similar to what is commonly called, the “scientific method,” in that ideas are measured for their truth or effectiveness by the consistent results they produce when carefully applied to various situations or applications. The Scriptures, by the way, are the “father” or primary source of
Read more
0

Principle Ten: Justice-Equality This month’s Bottom Line is an excerpt from Dennis Peacocke’s contribution to Uli Kortsch’s book, The Next Money Crash and a Reconstruction Blueprint, available now on Amazon.  Humanity’s cry for justice and equality has been historic in virtually every people group. The establishment of social customs and laws everywhere attests to this reality. The
Read more
0

Principle Nine: Limits The principle of limits cannot be overemphasized as an essential guide for successful living, both personally and socially. Limits protect us from destructive thoughts and actions. Properly applied, they spur us on to new levels of maturation and the excitement of challenge and change. The concept of limits is extraordinary because it
Read more
0

Principle Eight: Localism–Centralization As noted with Principle Three: Reciprocity of our series on the Twelve Master Principles, many major principles are counterbalanced by an opposite principle. The intertwined examination of the equal-opposite relationship between localism and centralization is one such reality. Human relations tend towards intense, close relationships and, conversely, the constant pull of merging
Read more
0

Principle Seven: Jurisdictional Government The Bible has not been written as a textbook. Even though it is full of principles, truths, their numerous applications, and the history of people, cultures, and events spanning thousands of years, it is written as a story with multiple plots. Yet there is one major theme that stands out: Our
Read more
0

June 2021 – Special Edition Recently, I took my first airplane trip in sixteen months. I have usually flown between 70,000 to 115,000 miles per year since 1978. Needless to say, staying home this much has been a wonderfully strange but much needed time. Of course, getting on the airplane with masked people who clearly
Read more
0