Back into the Dark Ages? An Intelligent Battle for Freedom of Speech & Freedom of Religion

I was arrested in the Free Speech Movement at Berkeley in December 1964 over the issue of recruiting Freedom Riders to help eliminate segregation laws in the South. It was a big deal to me since I was still on an academic-athletic scholarship, although injured at the time. The newspapers took note of that. Yet, if we won’t stand up for free speech or freedom of religious conscience in a Democracy, what else has greater import to human political freedoms? 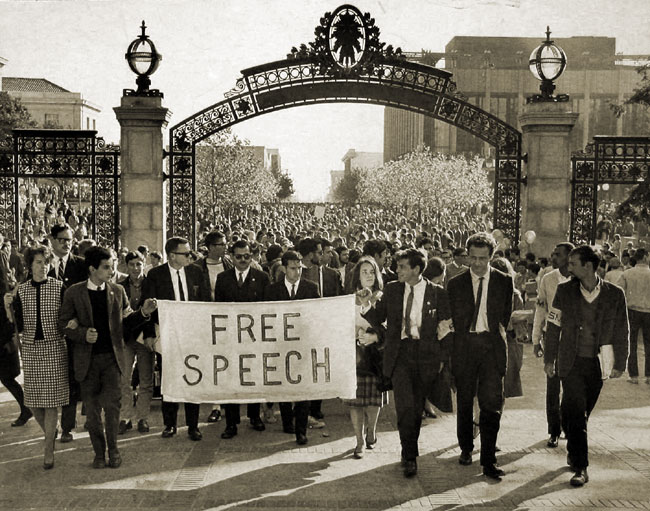 Indeed, our nation was founded on those two cornerstones: free speech and free convictions. Though tragically connected with slavery and exploitation, our nation’s gift to the world was a unique set of governmental principles and structures never before combined in secularist political governments. It was those two principles of freedom of speech and freedom of religion that led to the demise of slavery and multiple other injustices in our history. These First Amendment freedoms define who we are. Now they are in grave danger.

Having said all that and before we proceed, let me make several other critical comments. Number one: gay marriage or civil unions are in the hands of the courts. While we may disagree spiritually over this issue, civilly speaking, it is a moot point now. Number two: to spiritually challenge homosexual activities is not “hate.” All sexually consummating activities outside of heterosexual marriage are Biblically challenged by the Scriptures. Christians who hate homosexuals have missed the core of Christ’s message. Thirdly, what makes “political correctness” so insidious is that people’s fear of other people’s rejection trumps their capacity to evaluate honestly what they really believe which creates a culture of superficial convictions and man-pleasing cowardice. Lastly, to stereotype all homosexuals politically, intellectually, or in terms of their grasp of historical perspective is as absurd as trying to do that for heterosexuals. What now follows is directed at those of both heterosexual and homosexual orientations who, in a “dumbed down” culture, fail to comprehend the historical consequences of removing our First Amendment rights. I also recognize that some sectors of the homosexual community are clear on this issue and do not seek to destroy our fundamental freedoms.

If there was no free speech, the civil rights movement or even the “success” of the gay agenda would never have happened. Whether we approve of differing things, concepts, or movements is not the issue; the issue is do we believe freedom of conscience and speech are core human rights and, therefore, should not be abridged unless human life itself is literally at risk? The audacity of the gay agenda to suggest that we should take away the very freedom that birthed their movement is the height of hypocrisy and an intellectual embarrassment to even have to challenge it. Yet, recent events in Houston and the fascist sector of politically correct speech that have already cost people their jobs and livelihood—not for “hate speech,” but for simply disagreeing with portions of the gay agenda—force all freedom-loving people to do so. The Brave New World of Nineteen Eighty-Four is accelerating not at the hands of civil technocrats or fascist megalomaniacs but rather by sexual preferences so fragilely held that they cannot withstand mere negative words. The cry for “tolerance” for those most currently benefitting from it is apparently a one-way street in the minds of many.

Frankly, from a purely secular point of view, I care very little who is sleeping with whom. God’s standards are self-enforcing, scripturally revealed, and don’t need my opinions or emotions to define them. The freedom of speech issue here is that no one is shouting “Fire!” in a theater or demanding by penalty of death or bodily harm, anything. Our long, slow march out of the Dark Ages, superstitious bigotry, and religious fanaticism looms in the shadows from this ominous new direction of the gay agenda. “Sin” cuts a wide swath in everyone’s eyes, both politically and spiritually. Banning social opinions as a crime is a dagger in the heart of freedom. Sexuality should not trump our long march to gain the precious gifts, nay rights, that are now at risk. “Politically correct” speech may well be achieving an unintended outcome that neither Hitler nor Stalin could long impose.

We will now find out where the fires of hatred burn with greatest heat. As confused, divided, and distanced from historical perspective and rational, consequential thinking as we now appear to be, are we really this blind? We shall see if the old adage, “sticks and stones can break my bones, but words can never hurt me,” is true for all sexual preferences or only for the ones who truly love freedom enough to not help destroy it. And that is… THE BOTTOM LINE.