On the Decline and Fall of the American Empire in Philadelphia

As many of you know, at the formative meetings of the Founders of this nation in Philadelphia, a chair was present with a carving on its back of a sun on a horizon. The question at the time was, “Is that sun rising or setting?” George Washington and Benjamin Franklin mused upon that question as a prophetic symbol of the new nation they were laboring to birth. Was our new nation really being birthed or was it preparing to be buried? Over two centuries later, we find a similar question relevant to our current generations:

Is the United States on the cusp of a spiritual re-birth or a more rapid decline into second-rate mediocrity?

This critically important query raises an even more important question, one that transcends the particular fate of this nation and goes to the heart of the issue for any and every nation:

How do we identify the core issues by which some nations are exalted beyond others in terms of vitality, longevity, and the inherent value of the lives of their citizens?

Inside the answer to that question is a key which opens the door to the possibility of mankind living out our highest potential rather than simply existing in unrequited hope. To correctly identify what is essential is the first and most important part of any worthwhile endeavor. Asking the right questions is the “first and most difficult step.”

Why do empires rise or decline? The following theories have all been suggested as explanation for the level of a nation or people-group’s vitality:

My answer to the question concerning our nation’s position on the cusp of revival or decay rests upon how our nation’s leaders define our current situations based upon their deployment and promotion of the above four social theories. Is the primary answer to a culture or nation’s vitality based upon resolving classism, racism, social myth, or the identification and application of absolute truths? For me, the inherent issues of economic justice, racism, nihilism/ existentialism (“realistically” dealing with false idealism), are all addressed and resolved by issue number four: creationism. By the way, creationism ultimately deals with the issue of a supreme Creator who manages ultimate truth far more than the lesser question of, “Did our Creator deploy any form of evolution?” 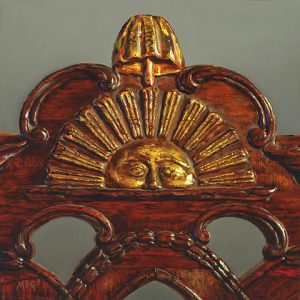 It was reported that as the final signatures were being added to the Constitution, Benjamin Franklin concluded while looking towards the President’s chair, “But now at length I have the happiness to know that it is a rising and not a setting Sun.” The United States of America was congealed in Philadelphia with a “sun rising horizon” because they believed overwhelmingly in a supreme Creator and absolute truth regardless of their views on providence, deism, or other particular theological nuances. Even the Thomas Paine crowd believed in an ordered universe irrespective of their beliefs about traditional Judeo-Christianity. It amuses me that the further science goes in cosmology, the more they have to “reconsider” their initial theories of chaos and probability. That being said, the argument of whether our nation was founded by Christians or semi-secularists is a lesser debate that misses the point; our nation was founded by those believing in an ordered and cause-effect universe—the core issue was the existence of TRUTH—not class, race, or social myth.

So today, is the sun rising or setting on our nation? It depends on what God’s people do and the level of play for which they are willing to train and sacrifice. More perfectly put, it depends on what level they will allow God to play through them. And that is… THE BOTTOM LINE.

Prev Post Getting Back to Square One: The Problem of Evil
Next Post The Economic Consequences of Abortion