Racism and classism have existed for thousands of years. As manifestations of generic human sin, they are universal and clearly not unique to the United States. As expressions of man’s fallenness, they will likely never be fully expunged from among us. Racism, in particular, has historically been far more grounded in negative ethnic identities rather than simply skin colors. The countless wars in Europe over the centuries are a clear example of white people killing white people over ethnic identity. This is equally true of Asians; the history of racial prejudice between the Chinese and Japanese, for example, makes the point.

For the record, the word “ethnicity” refers to a people group of a distinct ethnic identity having a common genetic history. It can also denote cultural traits and distinct characteristics. Historically, it has seldom carried with it a negative set of evaluations but rather simply denotes a unique set of people.

“Race” or “racism” frequently carries with it something quite different. It is not denoting a unique set of people as much as a people group who are separated by skin color or some negative characteristic within their ethnic identity. The Irish had an ethnic identity, but not a race identity. RACISM FREQUENTLY DENOTES A PREJUDICIAL DISTINCTION IN WAYS THAT ETHNICITY DOES NOT.

As modern genetic science has repeatedly proven, genetic differences between people over skin color are relatively minor compared to other genetic variations. Skin color, per se, as a sign of racist distinction, is relatively unique to the United States. All of the issue is fueled by the fact that American slavery, as well as elements of European slavery, focused on Africans during the last several centuries. Rome, for example, in its apex in the time of Christ, was comprised of more than 60% of its population cast as slaves. They were white slaves, brown slaves, black slaves, and all variations in between. Racism, of course, is an absurd concept at its core because there is only one race and one ultimate genetic gene pool. Humanity is one race, so claims of “racial superiority” only reveal the ignorance of those who carry it as a social disease.

The playing of the “race card” in the US is a highly flammable issue. Racism, of course, exists, but it is not limited to only whites as we have already noted. Racism is a social slur and an insult to both sides of the slur. It says to both sides, “You can’t see me because of major flaws in your character.” It reeks of fear, hate, unmet power needs, excuses for personal weakness, and other sordid baggage. Here is the US, it also insults African Americans who are not “ghetto enough to be black” because they have changed economic-social class distinctions. For middle-class and upper-class blacks that is a real double whammy; they are cut off from their roots on one side and caught under the subtler form of racist “glass ceiling” on the other side. I get that.

As an old civil-rights activist, I have felt for many reasons that we Americans need to have far more honest conversations on the subject. We are better at all this than we used to be, but we are still stalled and stuck at levels we should not accept. While a wider list of issues exists, I will limit my discussion here to one of the most major ones: classism. 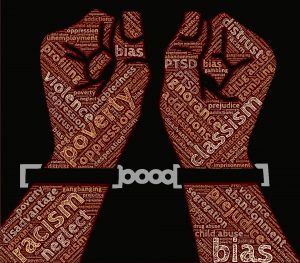 “Classism” is a term most properly used to distinguish social, attitudinal, and behavioral changes that occur when people economically graduate from one set of social relations into another more prosperous set of relationships. Some people don’t change when they reach more substantial income levels, but most people assimilate into the behavioral changes of the “new class” in the normal human process of our need for community and social belonging. For me, this is both a no-brainer and a point of deep frustration as I listen to the incendiary drivel coming out of so many social pundits who labor to clarify these issues or use the concept of race as personal weapons against others.

For example, the middle class has far less need to steal than the lower classes, especially the youth, for purely economic reasons. Stealing, therefore, does not have the same level of negative stigma within the lower class. It becomes a class identity rather than an ethnic identity amongst both whites and blacks of the similar economic and relational communities. The drug culture that cuts across all classes has, of course, severely complicated this discussion.

Class-based culture covers the levels of education of those in the class, their vocabulary, interests, leadership positions in their chosen fields of work, and multiple other areas of their lives that distinguish their particular class. These kinds of class distinctions show up most power

fully in terms of relationships. In fact, the most successful anti-poverty programs I am familiar with note that the single-most important step out of poverty’s lifestyle has little to do with “making more money.” Guess what it definitely is? Changing who you “run with” (relationships). Of course, many trapped in the ghettos are neither criminals nor into drugs, gangs, or “being in the ‘hood” as marks of social value.

Poverty tends to produce a class set of values, attributes, and barriers to getting free from its clutches. This alone makes it very challenging to get out of poverty. One has to leave the peer pressure of poverty’s relationships, at least until one’s life choices have changed. This is reality.

What also has a huge effect on this whole discussion is the destruction of the family unit, two-parent incomes, and class evaluations on the importance of education. Once again, my primary purpose of this discussion is to highlight race-class issues.

Until we can begin to discuss poverty, racism, and several other sure class-based realities, we are stuck in the merry-go-round of fruitless and destructive public narratives. Even far, far worse is the painful reality of the “modern plantation” holding millions trapped in the mythology that poverty rests solely on the lack of money and racism. Let’s begin the task of freeing our brothers and sisters from systemic ideas maintained by the most insidious “racism” of all: that “helpful” bureaucrats will get people free because they are incapable of getting there themselves. Really? Let’s have some honest conversations about that. And that is…