What Is to Be Done with Donald-the-Trump?

Conventional politics has been currently trumped by Donald-the-Trump’s entry into the Republican Party’s quest for the oval office. Uninvited and carrying with him a dazzling ability to insult his way into the mainstream media’s constant attention, he presents a host of problems to the party who previously set forth Mitt Romney as their last “normal” candidate. Talk about a contrast!

So, here’s where we stand. Stealing the strategic philosophy of another Donald, Donald-the-Trump caught the brilliance of bringing “shock and awe” into the political world and a new political strategy seemingly began to germinate in Trump’s mind which was otherwise engaged in contemplating the vastness of his negotiating skills. Little did the establishment arm of the Grand Old Party realize what it was heading towards.

Now the Republican Party’s quest for the usual process of issue-based debates and their traditional persona of “let’s be practical and rein in liberalism’s excesses” has gone up in smoke, or to be more accurate, in a constant daily dose of the consternation resulting from “Trump said what yesterday?” Meanwhile, back in what used to be the “real world of politics,” the Democratic Party (I’m sure even their agnostic proponents) is praying or meditating towards the reality that the Republicans will be forced to run the Donald in 2016. He makes Barry Goldwater (smashed by the Democratic landslide in 1964’s election) look like only a minor gift to them compared to the Great Negotiator. 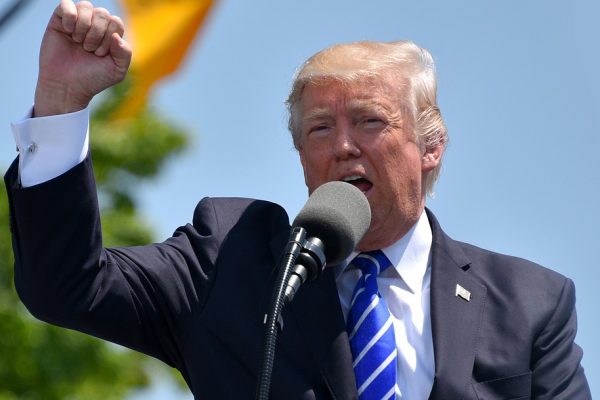 Please permit me to speculate a little about where this all may go. Let’s suppose Hillary Clinton and her Obama-backed forces can slow down the email catastrophe consequences through appeals and whatever until too late in the electoral process to affect the election. She has a formidable percentage of the population behind her who no longer care about the minor details of breaking  Federal laws or exposing national security secrets. Since we live in a post-modern society of “truth is in the eye of the perceiver,” it’s only uptight conservatives who see those trifling things as important anyway (people like the Republican obstructionists). After all, what matters is that we need a woman president to show that we care far more about political correctness than the lesser things of the past like integrity. Another possibility is a post-election conviction of Hillary with a last-act-of-grace escape from criminal behavior wherein President Obama pardons her on his way out of office and her way in (I’m just saying).

OK, so what are we to learn from the Republican dilemma of Donald-the-Trump as the spoiler of their aspirations? Just for the record, I get that he represents the disgust of millions of people with our current broken system. I also get his in-my-brain, out-my-mouth honesty (does plain speaking trump clear thinking?) and the power of its refreshing flavor. I get the reality that he is a powerful antidote to political correctness and big-brother, centralized government. I really do. However, his over simplification of complex real-time issues is a kind of populist no-think that I fear will be quickly followed on both the left and right. Historically, such contrived simplicity always accompanies a society in crisis awaiting real answers to its problems that usually require huge change, enormous social disciplines, and the years of process required to right the ship, so to speak. Whether our nation can actually do that and become principle-based rather than blame-based, fantasy-based and entertainment-based, is another question altogether.

Friends, Donald-the-Trump has trumped the normal political game in the United States. He is a harbinger of things to come in our nation which trivializes principles, exalts nerve-stimulating entertainment, believes that the external government of society can make up the difference for the absence of internal self-government, and casts off true debate with the coercion of social shame by name calling. Donald Trump is an important ice-breaking ship and serves us well in that capacity, and that is … THE BOTTOM LINE.