I arrived in Pretoria, South Africa for a 5-day stay. I was hosted by Francis and Mariell Adja and their children, a beautiful family who have recently moved to Pretoria from Madagascar and are graduates of the School of Business Leadership. During this time, we met with some key business people who are interested in the school, including a Professor from Pretoria University who showed interest in getting GoBusiness accredited within the University. I spoke briefly in the local church that Francis and Marielle attend, and we shared a lovely afternoon together with the pastor of their church. I also was able to meet with GoBusiness graduates from Johannesburg. They are building a relational network and working to start GoBusiness groups there that Adja could facilitate. 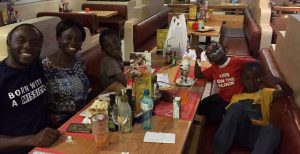 Francis and Murielle Adja with Family

Many of the leaders I met with have expressed interest in doing wider meetings in the future, and we are prayerfully looking at hosting a Transforum in South Africa as well.

Next, I flew to Antananarivio, Madagascar for two days where I connected with our wonderful, local hosts, Nampoina and Natalie Rabenasalo. I also reconnected with Marc and Doris Stettler from Switzerland who work with GoBusiness in Switzerland and France, and pioneered the school in Madagascar. Doris does a superb job of translating me from English to French!

We then went to Réunion Island. It is a most beautiful place and the Stettlers connected us there with Pastor Prince who wants to bring GoBusiness to his people. Our first meeting was a two-hour interview they set up on a Christian radio station. This was a first for us all and a fun experience. Our interviewer, Harry, did an amazing job. We mostly spoke on business and the Kingdom of God. 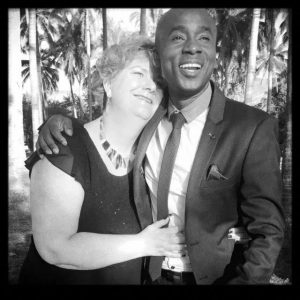 Over the next two nights, we held some well-attended business meetings in their very alive and enthusiastic multi-cultural church. The worship was amazing with the African folk, including their kids, out dancing as only the Africans can. Pastor Prince, who is from the Congo, and his wife, Sylvie, are an incredible couple and we have linked closely with them for the future. The Island is totally French-speaking with very little English, so my personal conversations were somewhat limited, although Marc and Doris worked hard to keep me up with what was going on!

On Sunday morning, we spoke at the church’s two services. This was followed by a baptism, an incredible event with 12 new converts being baptized. We then all shared lunch together.

On Monday night, we had a lovely trip around the Island including going to the top of the mountain that overlooks major craters created by volcanic activity that are now villages. They are only accessible by foot (a 7-hour walk) or by helicopter. It was a magnificent day, and the views were just spectacular. That evening, we attended a home group where we ministered and prayed for a number of people. We were grateful for the presence of the Holy Spirit and to see people’s lives touched. 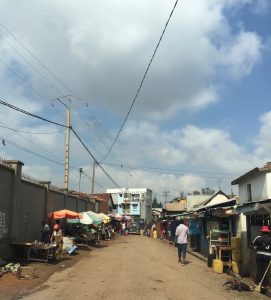 It was sad to say goodbye, but it is easy for us to believe that we have future work to do there.

Lastly, we returned to Madagascar which is a sharp contrast to Réunion Island. It sadly has the third lowest living standard in the world. 20 million people live on this large Island, rich in resources, food, and an excellent climate for agriculture. These people should be enjoying one of the highest living standards in the world; instead, issues such as corruption (mostly petty) and other such ills from fallen humanity keep many of the resources out of the hands of ordinary people. We carry a huge burden for this country and really believe we can make a difference here in a short time if we can get the right people into our schools and meetings, and begin to implement the principles of the Kingdom of God. 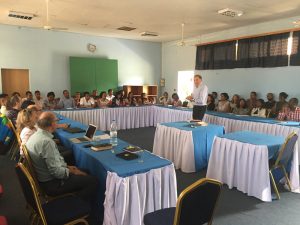 A class in session with Pierre Bonin teaching

We then moved to a lovely camp where we did a GoBusiness Intensive. We were joined by Pierre Bonin, a key GoBusiness leader from France. Pierre did a wonderful job running the weekend and sharing from his wealth of experience in business and the GoBusiness school. 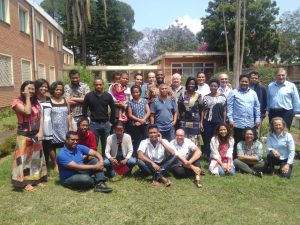 Marc Stettler (back row, 4th from right in glasses) & Doris Stettler (bottom right) with the GoBusiness class at Madagascar

It was a delight to have previous students returning, new students registering, and a further number expressing much interest at our promotional day. A number had traveled seven hours from Tamitave to be with us. It was a very fruitful time, and we were especially delighted to have seven new students enroll at the conference.

We reluctantly said our goodbyes on Monday evening after completing a training session for interested Facilitators that afternoon. It was a tremendous privilege to be able to offer our services in such a variety of ways. We thoroughly enjoyed our fellowship and the close bonds formed with one another in all that God gave us to do.

What an amazing God we serve. 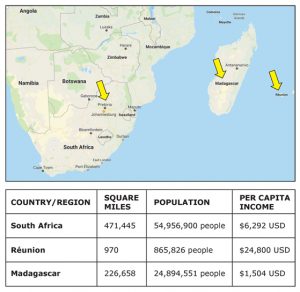 Funding is needed for the translation of schools into other languages (new software makes this increasingly affordable), to establish the schools’ online platform for these countries and regions, and to travel to further identify, empower, and train local leadership to help them become independent affiliates rather than dependents.

The article above gives you a good overview of Bruce Billington in his current role as International Relational Director of the Schools. He has voluntarily served with us for over 30 years. He began ministering and teaching with Dennis in 1987, has served on our board since 1992, founded our sister office in New Zealand in 1995, and has actively been involved over the years with both schools and provided leadership in the development of their curricula. We are now looking to hire him to serve not only in the school capacities but also as an official Ambassador for GoStrategic. Bruce has been particularly active in Austral Asia and that is where his primary focus and ministry would be in 2019. This fulfills a long-standing request for God to provide someone to work alongside Dennis and GoStrategic, growing what has already started. We believe God has equipped Bruce to answer this call.

Will you please consider helping fund this work? One-time donations may be made online (to designate your funds for these projects, please write “Bruce Billington” in the comments box at check-out). To set up an ongoing monthly donation, please indicate this in the comments box, and we will follow up with you. Thank you for partnering with us in the advancement of His Kingdom around the world! 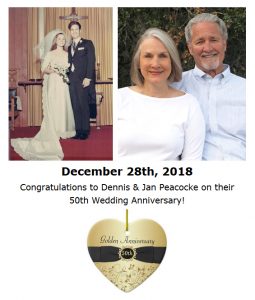 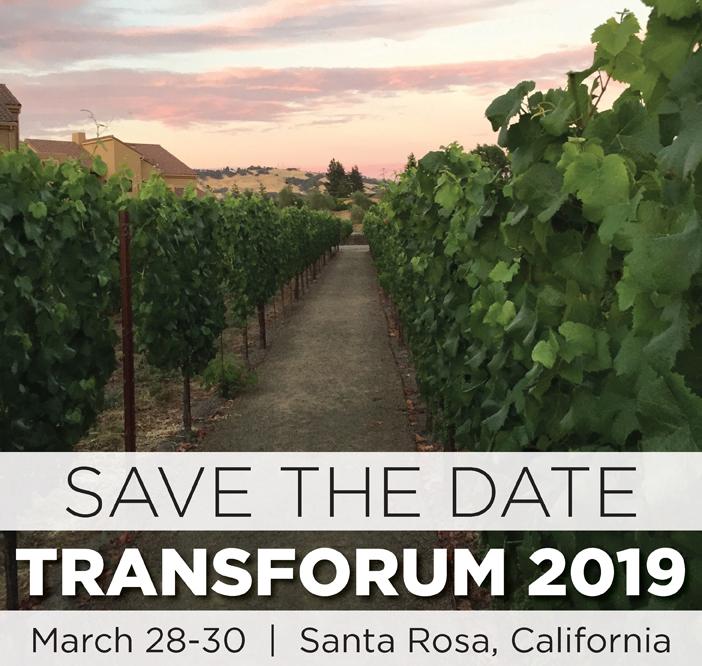 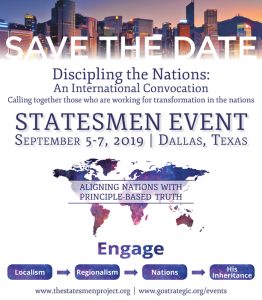 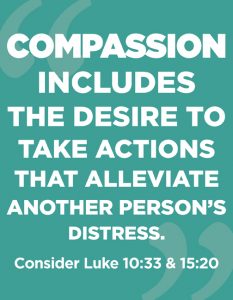 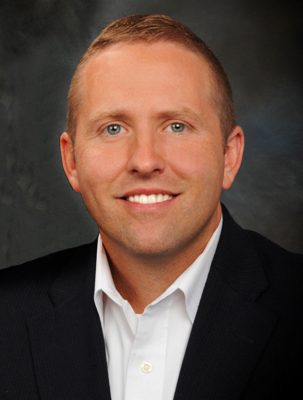 Ministry Partner Highlight:Jonathan Shibley & Global Advance It is no surprise to find a harmonious connection between two ministries who both use the word “igniting” in their tagline. As you may be familiar, GoStrategic has a stated focus of Igniting Personal & Social Transformation. If you visit the website of the longstanding ministry of Global
Read more
0 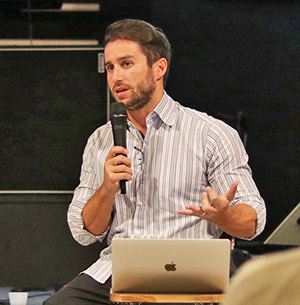 Discipling Nations in Brazil Brazil is a country blessed not only with natural wonders, from Iguazú Falls to the Amazon Basin, but a growing spiritual momentum as well. It is home to the largest population of Portuguese speakers globally and boasts being the second largest sender of missionaries in the world today. Our team leader
Read more
0 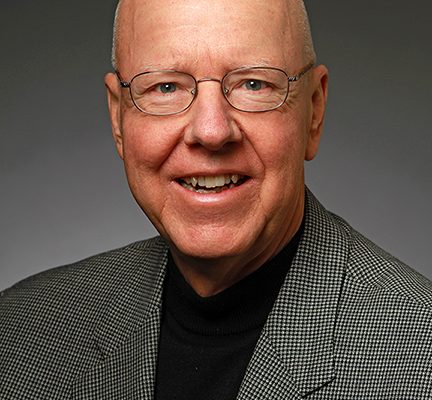 Ministry Partner Highlight: Gerald R. Chester, PhD Dr. Gerald Chester is profoundly aware of the principles of God’s Kingdom as they are applied in the realm of business, personal discipleship, and spiritual maturity in general. He is our senior GoBusiness Facilitator and a highly valued source of counsel both for me personally and for training
Read more
0 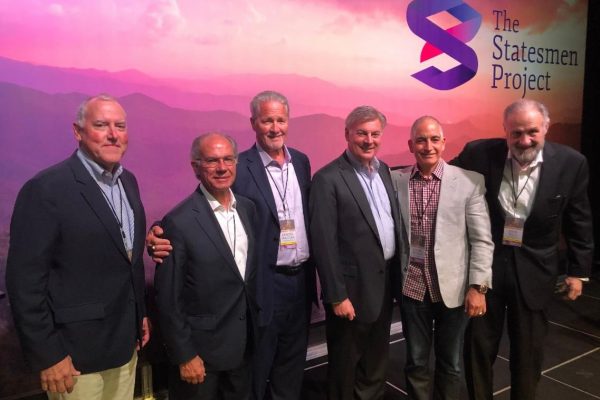 2019 Statesmen Event As the ministry of GoStrategic gets deeper into the process of discipling nations, we continue to look for cultural and governmental leaders who are in positions of influence. Within the last year, we have strengthened The Statesmen Project’s Focus Groups while identifying and inviting specific leaders from more than 40 nations where
Read more
0 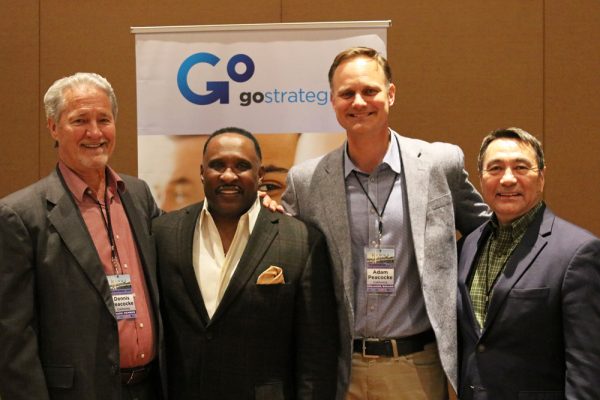 Transforum 2019: Our Identity as Kings & Priests in a Secular World The priesthood of the believer and the practice of prayer have laid a strong foundation for this current move of the Kingdom of God. The Bible makes clear that in His Kingdom, we are to function as both priests and kings (Revelation 1:6).
Read more
0

2018 Dallas Statesmen Event Five years of work was revealed at the annual gathering of The Statesman Project in Dallas, Texas this September 6th-8th. The theme of the event was “Generational Momentum.” Many attendees came with sons and daughters who are working in ministry with them. It was wonderful to see such a broad representation
Read more
0